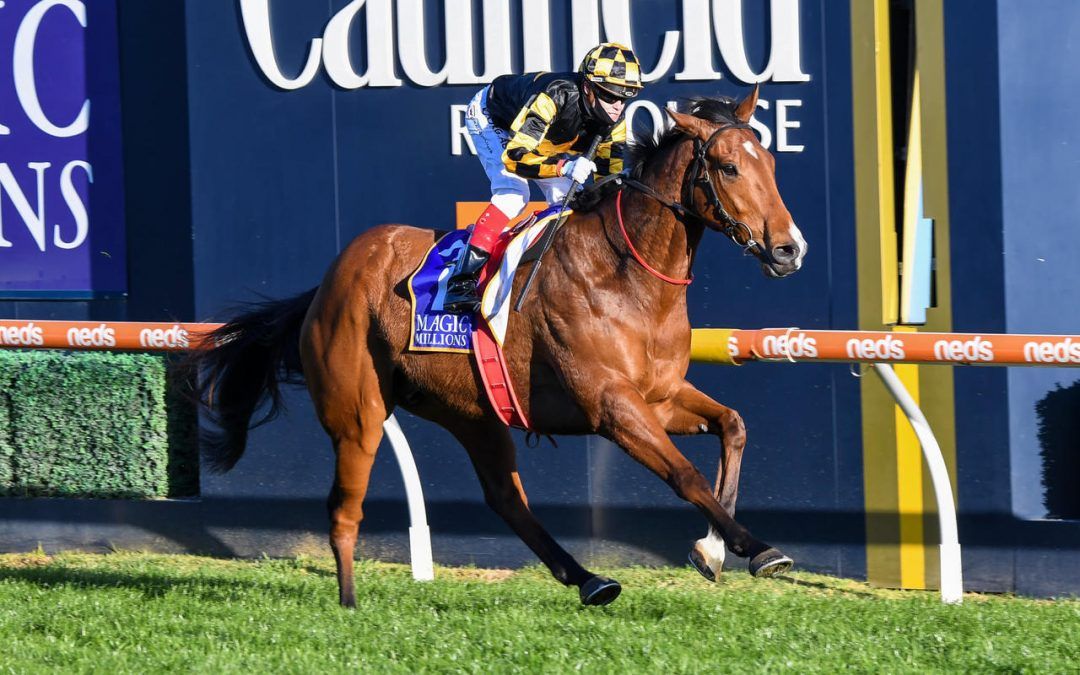 Giant galloper Behemoth gave South Australian trainer David Jolly his second Group One winner and his budget ownership group Grand Syndications their first when he took out the Memsie Stakes at Caulfield.

Champion jockey Craig Williams positioned the gelding, who weighs 600 kilograms and stands 17 hands, behind the leaders Begood Toya Mother and Streets Of Avalon in the run and always looked to have the 1400m race under control as he went on to record his 60th Group One win.

It was Jolly’s first victory at the top level since Zip Zip Array won the 2002 Goodwood Handicap.

The Goolwa-based trainer watched from Morphettville races where he prepared a winning double courtesy of Andrea Mantegna and Streetcar Stranger.

“When he landed in the right spot I thought he’d be hard to beat,” Jolly said.

“When we drew inside some people thought that wasn’t a good thing but I was happy. He was able to take a spot and stretch out.

“I said to Craig to use him from the gate, be a little aggressive. It worked out so well. I’d have loved to have been there.”

Jolly said they would nominate Behemoth for the Cox Plate but he wasn’t sure whether the horse was better placed sticking to handicaps.

“We’ll bring him home and talk about where we go. I’m very mindful that he was more forward in his preparation than many of the others but it all worked out so well today,” Jolly said.

Behemoth has an unusual back story as he was sold for $120,000 as a weanling but later fetched just $6000 as a yearling when Grand Syndications and Sam Lyons bought him.

“After that we gave him to David and gave him time to develop,” Lyons said.

“Our bloodstock agent John Price picked him out. You’d have to ask the other buyers why he went for $6000.

“It’s a big thrill. David has been so patient with him. People have dropped off him along the way too. He just needed time.”

Williams said he was able to utilise the inside draw to advantage.

“He was quite dominant so he’s done a really good job off a hot speed today,” Williams said.

Phillip Stokes was thrilled with the effort of Mr Quickie and said his performance vindicated their decision to run him in the Memsie Stakes instead of a handicap race on the same program.

Stokes said Mr Quickie would have his next start in the Makybe Diva Stakes at Flemington on September 12.