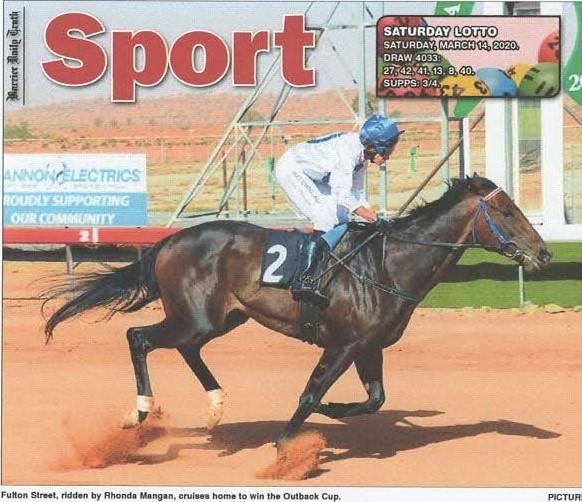 Outback Cup-winning jockey Rhonda Mangan was on a high after a track record-breaking win on Fulton Street at the 55th annual St Patrick’s race meeting on Saturday.

The 45-year-old hoop steered the David Jolly-trained horse to a convincing victory, outclassing Cooee March by five lengths in the $24,500 feature event.

Mangan was counting her blessings after the victory. She only picked up the ride earlier in the morning after another jockey pulled out, reportedly not willing to jump on a plane and risk catching the coronavirus sweeping the world.

Mangan was already scheduled to ride in seven of the eight races when she got a phone call from trainer Jolly.

“Mr Jolly rang me this morning and said ‘my jockey is not turning up today, can you ride my horse in the Cup’.

Luckily for Mangan, it was the only race she didn’t have a ride in, so she jumped at the opportunity.

“I didn’t even know what the horse was or anything,” the Cranbourne-based jockey said after the race.

“I had a look at the form, and it had amazing form and seemed like a genuine chance of winning,” she said.

“It was great to ride, a really lovely horse.”

Fulton Street jumped early from the outside barrier in the 1600m Cup, but had to contend with the pack.

“There was a little bit of carnage early,” Mangan admitted, and she had to pull him back because she didn’t want to lead.

“But then he just got going, and when he hit his stride, they couldn’t get near him,” she said.

“I just steered him. It was unbelievable; he’s a very good horse.”

Mangan, who also trains horses, has been riding since she was 20 years old, and has been getting back into the saddle more after her jockey partner Grant Challinger suffered severe injuries in an accident.

Challinger was thrown from a horse in a Hobart mounting yard, and bore the brunt of the 500kg horse when it crashed down on top of him. He suffered a broken collarbone, four broken rear rubs, a cracked hip and a crushed pelvis.

Mangan has been picking up her partner’s rides.

“Now he can’t ride because of his injury, so that led to me taking over the reins and doing the meetings that he’s been doing,” she said.

Fulton Street now has $144,425 prizemoney to his name with nine wins from 32 starts, including a big win in Strathalbyn two weeks ago.

All that prizemoney might not go a long way though. Eleven individual people and three syndicates own the five-year-old gelding.

His home track is in Goolwa, South Australia.