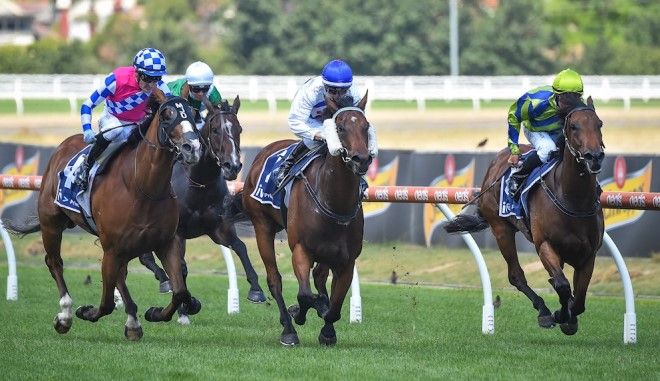 Enthaar furthered her reputation as being a filly of extremes after tailing off as a hot odds-on favourite in the $160,000 Listed W.J. Adams Stakes (1000m) at Caulfield on Wednesday.

The speedster, who was sent out the $1.45 favourite on the back of some late spring success, refused to settle in the run outside of leader Esta La Roca and was the first horse beaten once the four-horse field turned for home.

On the line, Enthaar was beaten nearly five lengths by the winner Streetcar Stranger ($6.50), who held Mossman Gorge ($11) by a head with three quarters of length to Esta La Roca ($5.50) in third place.

“I tried to work with her the best that I could but she emptied out really fast today,” jockey Jyne McNeil said of Enthaar.

“I don’t know if the heat had anything to do with that or she is what she is, just a little bit inconsistent.”

Co-trainer Ciaron Maher said Enthaar had looked to pull up well enough and said he had no lost faith in her looking ahead to the autumn as she will be improved by the run.

Meanwhile, winning rider Jamie Kah said Streetcar Stranger, who is trained by David Jolly at Goolwa in South Australia, also had a tendency to mix his form.

“He’s a tricky horse,” she said. “If he shows up on the day, he’s a super old horse and David said he had been trialling really well and he has to show up and get the right run.

“I was happy we drew in today. I wanted to do as little as possible and he always has a nice kick if he gets the right run. That was the key. He settled lovely.

“I wanted to get off the back of Lloyd’s (Kennewell’s – Esta La Roca) and follow Enthaar everywhere I could. I was surprised we got past it very easily.

“I was really happy with his effort and hopefully he can go on and win some more races.”