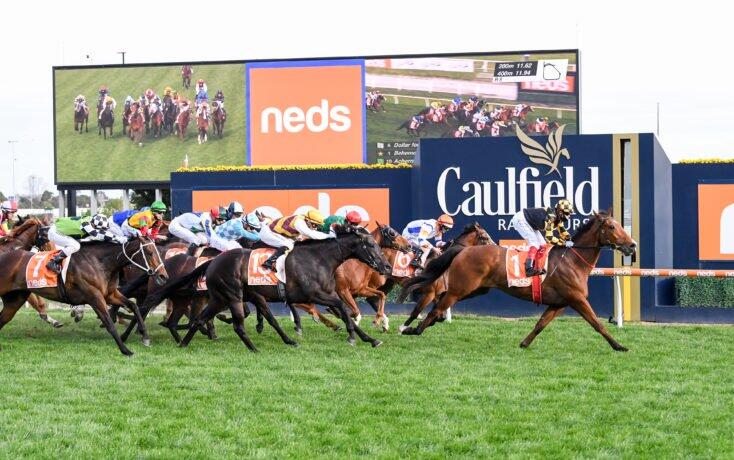 David Jolly has been gifted an enviable array of options – including a possible shot at The Everest – after Behemoth joined an elite group of horses to snare both of the Sir Rupert Clarke Stakes and Memsie Stakes in the same year.

The giant SA gelding, a $6000 bargain buy, took his earnings to over $1.6 million with his seventh victory as South Australian stables dominated.

Williams took his career Group 1 haul to 57 with his sixth triumph in a race his father Allan has also claimed as both a jockey (twice) and trainer.

Trained at Goolwa by Jolly, Behemoth set a weight-carrying record by hefting 60 kilograms to advance claims of a slot in The Everest.

“We’ve got a bit to think about but you would think he’s done enough for someone to call us up and inquire about The Everest with the form he’s in,” managing owner Sam Lyons said.

“He had the big weight. They did everything they could to beat him and he didn’t get the best run but he still managed to win.”

Jolly hinted the Cox Plate was probably not a realistic target this season with the massive galloper, but indicated a drop back in trip was possible as Everest speculation swirled.

“I just wish I was there but it was great watching it on the couch with the family, too.

“It’s an amazing feeling winning these races with him now. He’s a fantastic horse.

“After the Spring Stakes win we thought that everything he does after that would be a bonus. Then he’s just kept winning. Amazing.

“We’ve got a few options now and I’ll talk to Craig. It’s a good problem to have in that we could train him to go back in distance or step up.”

“It‘s a special race for my family as Dad won it as a jockey and as a trainer,” Williams said.

“We had a challenge carrying 60 kilos but it was on a 56 kilo minimum. He was the best horse in the race and he made my job easy.

“His performance was excellent, he got a great run, clear running and he launched late. It’s a credit to him and their management with him.”