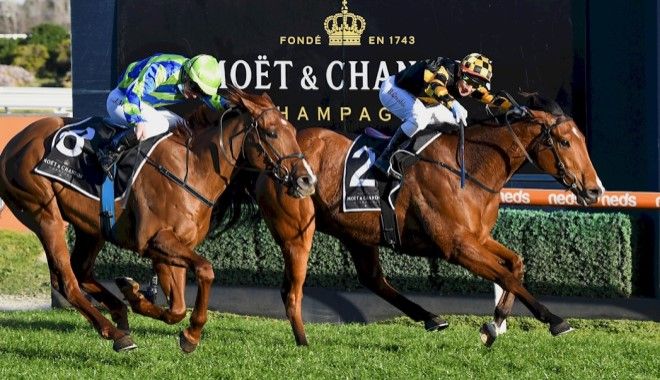 Behemoth became the first multiple winner of the Memsie Stakes under Group 1 status when denying fellow South Australian gelding Beau Rossa for the second consecutive start at Caulfield on Saturday.

The David Jolly-trained Behemoth defeated Beau Rossa in the stewards’ room when the pair met a fortnight ago in the G3 Spring Stakes (1200m) at Morphettville.

Saturday’s Memsie was decided on the track, Behemoth ($3.20) settling just forward of midfield on the back of Tofane ($3 favourite) who along with Behemoth was heavily supported to win Melbourne’s first Group 1 race of the season.

When the pace slackened at halfway as Craig Williams restrained Tofane into the box-seat, Behemoth’s rider Brett Prebble made the decisive move to commence a three-wide run around the outside of Tofane and gained first run on the unfancied leading pair of Red Can Man ($21) and Sansom ($51).

Behemoth hit the lead with 200 metres remaining and held off the challenges of Beau Rossa ($12), who settled behind the leader, and Tofane who switched over the heels of Behemoth and chased gamely in third.

“That’s pretty special. I wasn’t actually sure if I’d got there, actually,” Prebble said, who gained the ride on Behemoth from the suspended Jamie Kah.

“I reckon he needed the run. For the last part he was coming back underneath me and he was putting his ears back and he was hurting a bit.

“I was encouraging him without sort of being too tough on him. He couldn’t give me any more. He couldn’t go any faster, the poor bugger.

“He’ll really come on from that. He had to do it the tough way. Got a little bit of a jostle at the half-mile (800-metre mark) and had to be three-deep. I was happy to get the favourite (Tofane) in a pocket and he was going to stay there for a while.

“I think he just peaked, a bit robust horse and I think he’ll come on. They’re going to have a lot of fun with him,” he added.

There were a series of eye-catching runs from those back in the field with the unplaced trio of Aegon ($15), Inspirational Girl ($9.50) and Colette ($21) attacking the line with purpose.

Dual Cox Plate winner Sunline was the last horse to win the Memsie Stakes twice, completing her double in 2000 and 2001.

Behemoth firmed from $9 into $6.50 with Sportsbet for the Rupert Clarke Stakes after winning the Memsie where he is almost certain to carry topweight in the $1m handicap at Caulfield on September 18. Saturday’s Cockram Stakes winner Probabeel remained $6 favourite.